Wicked is a Broadway musical, with music and lyrics by Stephen Schwartz and a book by Winnie Holzman. It is based on the 1995 Gregory Maguire novel Wicked: The Life and Times of the Wicked Witch of the West, itself a retelling of the classic 1900 novel, The Wonderful Wizard of Oz by L. Frank Baum and the 1939 Metro-Goldwyn-Mayer film The Wizard of Oz. 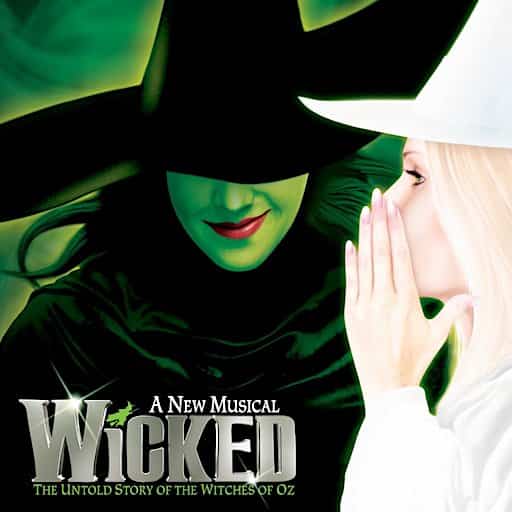 Even if you don’t consider yourself to be very well-versed in the world of musical theatre, chances are you will have heard of Wicked. Inspired by Gregory Maguire’s novel of the same name, which was published in 1995, it premiered on Broadway on October 30th, 2003, after a successful run in San Francisco earlier in the year. The original Broadway cast was made up of musical legends: Kristin Chenoweth as Glinda, Norbert Leo Butz as Fiyero, and Idina Menzel – of Frozen fame – starring as Elphaba.

One of the reasons that Wicked is so popular is the sheer scale of its production. It has been at the Gershwin Theatre on West 51st Street in the Paramount Plaza building in midtown Manhattan since its Broadway debut in 2003. The theatre has the largest seating capacity on Broadway with almost two thousand seats, and Wicked is regularly sold out thanks to its international reputation as one of the top shows to see in NYC. The theatre was designed in an art nouveau style by Ralph Alswang and opened in 1972 as the Uris Theatre before being renamed to honor the Gershwins in 1983. The set is bold, bright – and very, very green.

The original cast album won a Grammy Award and was nominated for ten Tony Awards, eventually winning three, including Best Actress for Menzel. Composer and lyricist Stephen Schwartz bought the rights to Maguire’s novel in 1998; although it isn’t an entirely faithful adaptation, Schwartz collaborated with writer Winnie Holzman to create a plot that worked onstage. The musical developed through a series of readings with Chenoweth alongside Stephanie J Block as Elphaba. Menzel joined the production in 2000 along with Joe Mantello as director. Wicked is one of Broadway’s most beloved productions: its scope is epic and its production is huge, glittering, and mesmerizing, but more than that, it is a story that is at its heart about love, truth, and friendship – and those are qualities that audiences will always respond to.

Get the Best Seats at the Best Price for Wicked on Broadway. Tickets Available Now.